The girls and I decided we had to continue our tour of the city. Our next stop: Arlington Cemetery. While this was not the happiest of places we’ve visited, it was something none of us were willing to miss. So Saturday morning, bright and early, we rode the metro to Arlington and bought tickets to do the tourmobile tour. 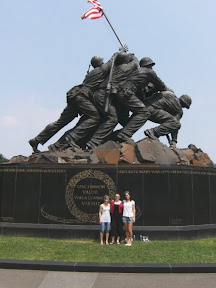 The first stop on our tour was the site of the Kennedy family graves and the eternal flame. As we made our way up the slight hill to the graves, I was shocked by thousands of headstones lined up all around us. I knew that Arlington was the resting place for thousands of military and government personnel, but until I was on that hill I had no idea how vast the cemetery was or how small I would feel amidst the 600-plus acres of gravestones.

The tourmobile then took us to the tomb of the Unknown Soldier; this was by far the most heart-wrenching stop of the day. The crowd was eerily quiet as we watched the formally-dressed soldier pace back and forth guarding his fallen comrade. Every 30 minutes the guards switch in a ceremony that has apparently been carried out around the clock through rain, sleet and shine for decades. But while we were there we saw another ceremony, one that really put the meaning of Arlington into perspective.

We saw the laying of a wreath. A wreath is laid in front of the tomb of the unknown soldier for each person buried in Arlington; today that is anywhere between 30 and 35 soldiers a day, every day of the week. The stifling humidity was oppressive and added to the emotion of the ritual as four children laid down the wreath in remembrance of a family member.

Our final stop on the formal tour was Arlington House, the former home of Robert E. Lee. Over 90 percent of the former Lee home is original, something I’d like to think I appreciate because of my experiences at Flagler. The house is under restoration, so all of the furniture and draperies have been removed. But even without all the pomp, the structure is gorgeous, nestled on the top of the hill amidst the trees. 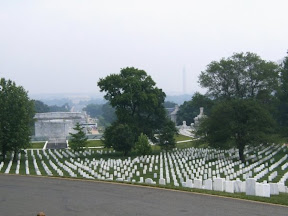 As we made our way through the house room by room, I was shocked at how advanced some of the architectural features were, like the natural air conditioning because of the locations of the windows and doors. I was also awed by the gorgeous view that the house offered of D.C.; everything was visible—the capitol, the George Washington Monument and of course Lincoln Memorial, which was built in a straight line from Arlington House to symbolically connect the North and South after the Civil War.

Arlington is also known for their Women in the Military Museum, which depicts the role of women in the armed forces since the Revolutionary war. The Museum was humbling and really made me realize the sacrifice of women even before they were allowed to formally serve in the military. For instance, during the Revolutionary War many women brought their families and traveled behind their husband’s militia just to serve as nurses and any sort of support the men needed.

The girls and I decided we had to visit one more place, although technically not in Arlington: the Iowa Jima statue. I never realized how detailed is was, or how large; in photographs it always seems so small, but it is absolutely gigantic.

So far, my trip to Arlington has been my most humbling while in D.C., and I would definitely recommend that anyone in D.C. visit it—seeing all those graves and that much history really puts things into perspective.

Be the first to comment on "The Tourist-y Thing"