The first week in July, the Grocery Manufacturers Association will host C-suite executives (i.e. the highest ranking execs in a company: CEOs, CFOs, CIO and so on) from 50 major companies within our membership. This conference is called the Future Forces in Food (FFIF) roundtable. 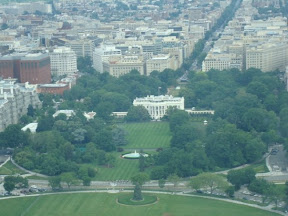 While July seems like a while away, we have a lot to get done. Specifically, the materials that need to go to press early next week: like the briefing book I’ve been writing. The book is research and background information on the major topics of discussion for the conference, like “water shortage preparedness” or “moving the market to suit future needs.”

This is the biggest project I’ll be working on all summer; I’m excited. But we’re a little behind schedule. We were forced to close last Friday because of the fire at Metro Station, which shut down electricity for a huge section of the electrical grid—including GMA offices. While having a paid day off is wonderful, we’re going to have to play catch up with FFIF.

Normally, I probably wouldn’t write this much detail about what I’m doing at work, but this blog is supposed to highlight not only my time in D.C., but also the internship that got me here. That said, I had an amazing review of my briefing book today. I e-mailed a complete draft to my supervisor, Brooke, who then immediately took it to the vice president of industry affairs.

Sometime after 3 p.m., I was called in to talk to Brooke and Stephen, the VP, about the book and its publication. Brooke kept telling me that I did a wonderful job—reward enough, because I was so nervous about what I was doing. Then they told me it had been decided that the information that I wrote will be the briefing book supplemented by white papers (specialized industry research papers) from companies that will be represented at FFIF.

I was absolutely elated that they liked what I had done so much. I was shocked when Brooke and Stephen then told me that I would not only be continuing to work with Brooke on this project, but also that GMA will copyright my name with the company when the briefing book is published industry-wide after the roundtable! I’m going to be “copyrighted and Googleable”—Stephen’s words exactly. This truly was a terrific Tuesday!

Be the first to comment on "A Terrific Tuesday"