As I’ve met people in D.C., I’ve made a point of asking them where their favorite places are to visit; I want to make sure that I experience the “true” D.C., whatever that is. Out of all the people that I’ve asked, only one person said the National Gallery of Art and only one person suggested the FDR memorial. In fact, many of the people I work with have never been to either of these places. This weekend I decided to pay a visit to those rarely suggested stops, the places ignored by most tours and forgotten by D.C.-ists. And I was surprised by what I found—by far one of the best days I’ve spend in D.C. 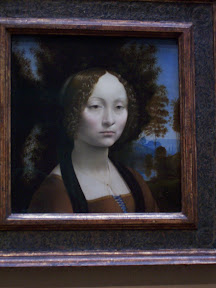 First stop, the National Gallery of Art. The gallery takes up two huge buildings full of almost every art form conceivable. The gallery has hundreds of paintings and sculptures from around the world divided by era and subdivided by country. I tend to appreciate more traditional art; perhaps that is because I can see the story the artist is telling unfold before me. I love the people and areas that are depicted in the paintings. Maybe this is the sociologist in me, but a person could spend hours meandering through the 93 galleries in the West building alone. This is exactly what I did: armed with a list of highlighted works featured in the West building, Kate, Lindsay, David and I began our exploration.

As we walked from room to room I was shocked by how many of these famous paintings were familiar to me—one I’d written a research paper on in high school, dozens of others had been the subject of discussion in my visual communication classes last year. It wasn’t until now, surrounded by all this history, that I really began to appreciate all the art, English and history classes that have taught me the significance of symbolism, adding another dimension to the portraits and scenes lining the walls of the gallery.

It wouldn’t be difficult to get lost among the paintings, starting with the only Leonardo da Vinci in the western hemisphere, then moving on to Johannes Vermeer and finally ending with Claude Monet. The collection is extensive and features works that have been donated from some of the largest private art collections in the world, including the Mellon art collection. 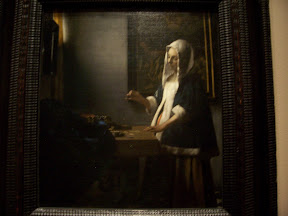 Halfway through our tour at gallery 51, we decided to take a break and grab lunch at the one of the numerous in-house cafÃ©s. My friend Ashley is interning at the gallery and told us exactly where to go—not to mention that we had to try one of the fresh gelatos made daily by gallery staff. The gelatos were fantastic, by far the best I’ve had since being in Italy years ago. As we all ate our ice cream and talked about the art we had seen so far, I realized how truly unappreciated the gallery is among both the locals and tourists. The gallery does not receive the same hype that the Smithsonians do, and while I appreciate the Smithsonians, I can now easily say I prefer the National Gallery of Art.

After 93 galleries in one day I feel like I’m only beginning to appreciate everything this museum has to offer. In fact, I believe that I’ve found what could easily become my new favorite Friday afternoon hang-out before meeting the crew for jazz. 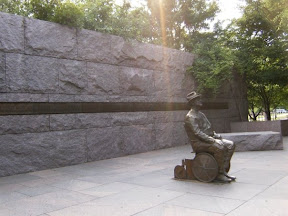 After the gallery, we walked to the Jefferson Memorial, a beautiful albeit high-traffic stop on any tourist’s list. From there we walked into what is technically Virginia and over to the Franklin Delano Roosevelt memorial. FDR is the largest of any of the Presidential memorials. Iits location also makes it the least frequented of the monuments. The memorial is divided to represent each of FDR’s four terms in office with statues depicting major events of the time—the man listening to a radio after Pearl Harbor, the bread line and, of course, FDR. Throughout the monument beautiful waterfalls are surrounded by prominent FDR quotes. The waterfalls and grass coupled with the heat made me want to curl up under one of the surrounding trees and read a book among the scenery.

By the time we were done, my feet hurt and we were all exhausted. In spite of our fatigue, I really believe we all came out of the day appreciating a little more of D.C.—and we had explored just a few of the often overlooked parts of this magnificent city.

Be the first to comment on "Appreciating the Unappreciated"