When I arrived in D.C., I made a list of everywhere I wanted to go before the summer was over. I knew that there would be places that other people had no desire to see, but luckily most of my friends and I shared the same interests in both history and exploring our temporary home. This consensus continued until we approached the topic of the United States Holocaust Memorial Museum. 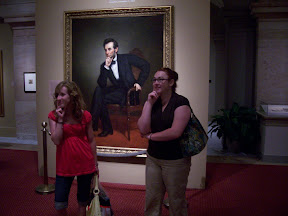 Many of my friends didn’t think they could handle the gruesome tragedy depicted throughout the museum; others had been already and had no desire to relive the depression that plagued them as they walked from exhibit to exhibit within the eerie building.

Kate and I have been talking about going to the United States Holocaust Memorial Museum for weeks but we never seemed to have a chance with our long list of museums and tourist areas we wanted to visit. This weekend we were finally able to go, and we decided that we would go to the Portrait Gallery on the same day in an attempt to waylay the depression that so many people had told us was induced by the Holocaust Memorial.

Saturday morning, Kate and I walked from Foggy Bottom through the National Mall and over to the Holocaust Memorial. The sidewalks had been cleared of the Fourth of July festivities and trash. The unceasing rain that had plagued Independence Day left a heavy fog across the city. The streets were completely empty and, as we made our way to the Memorial, everything seemed set to highlight the gloominess we were walking toward.

Everyone I had talked to told me that they had learned a lot at the museum. Looking back, I am surprised at how well I had prepared myself for the horrors depicted throughout the four stories of the cement memorial. I had seen many of the photos from research. I had heard some of the stories; my great grandfather was in a concentration camp, so I knew that, in some ways, the history would seem more real and personal to me.

Even despite my preparation, I was impacted by everything I saw and heard. But it was neither of these things that got to me. It was the smell. Part of the impact the museum has is that it works with organizations around the world to bring in temporary exhibits, and when we went, it was clothes that would had been worn in concentration camps. Another floor of the museum had a railroad car that had been used to transport people to the concentration camps; there was a hall that had thousands of shoes that had been stripped from Nazi victims. Maybe it was the age of these artifacts or the vast number of people that were walking through the museum at the same time as me, but the smell hit me more than anything else. The scent of moldy cloth or something rotting seemed to permeate everything.

When we left the museum, it was like taking a breath of fresh air, escaping not only from the smell but also the sadness that was so prevalent. Even despite the heavy grief, I think everyone visiting D.C. should take a few hours to tour the museum.

Our Fourth of July weekend wasn’t over with the Memorial. Next stop, the National Portrait Gallery; the Gallery is now one of my favorite Smithsonian Museums. The walls are lined with photos, paintings and statues of famous people—primarily Americans—and is truly a wonderful place to visit.

The remainder of the weekend was pretty calm. My roommate, Lauren, moved in Sunday morning. I introduced her to my friends here, including my friend Erin, who I went to high school with and haven’t seen since graduation. She just started an internship in D.C. and will be here for the remainder of the summer.

Lauren went with a few of us to dinner in DuPont Circle. Later everyone crammed into Lindsay and Ashley’s living room and watched “Independence Day,” the perfect ending to our Fourth of July Weekend.