One of the first things I thought about when I found out I would be in Washington D.C. for the summer was Independence Day. What better place could there be to celebrate our nation’s 232nd birthday? The day was above and beyond anything I could have anticipated. 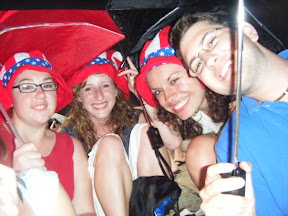 The week leading up to Independence Day was busy both at work and around the city. The streets and metro slowly started to fill beyond capacity as over 4 million visitors came flooding into Washington. Children toddled around with their parents, and the festive mood began slowly before encompassing the entire populace…I have never been anywhere that celebrated the Fourth of July to the extent that it was celebrated here, and it was wonderful!

My coworkers told me that I had to watch the fireworks and do all the “touristy” activities on the National Mall just once; if I decided to move here I would never face the hordes of people again, but the mall is something every Washingtonian must face. It might even be called a right of passage. With my coworkers’ words of wisdom telling me that I should avoid the metro at all costs resonating in my head, Kate and I set out to Independence Avenue to watch the annual Fourth of July parade as it journeyed through downtown D.C.

The parade featured various military bands, high school marching bands, acrobats, floats and ethnic groups from around the world all singing and dancing their way down Independence. Kate and I watched the parade as we walked down the sidewalk, squeezing our way between the families spilling over into the sidewalks. When the parade ended around noon, Kate and I decided that we had to celebrate the day properly by buying oversized pretzels from a street vendor—after all, pretzels are a truly American food, and we were celebrating the birth of America.

By the time we finished our lunch, David had found us and we were ready to go into the National Gallery of Art and view the second of the two museum buildings—the East Wing. The art here is fantastic, although I must admit I’m still partial to the other building. The East Wing has more contemporary art, some I’ll confess I don’t quite understand. I recognized the names of artists like Andy Warhol and Picasso, which liberally line the walls of this three-story structure.

The three of us spent the entire day wandering around the gallery enjoying the cool air.—D.C. is absolutely sweltering in the summertime and any reprieve from the heat is welcome—and the paintings, drawings and statues. Emily and Linne met us at the gallery, and together we made our way from room to room. By the time the gallery closed at 5 p.m. we were ready to scout out a spot on the National Mall so we could watch the fireworks. 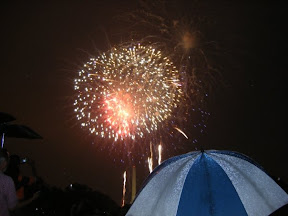 Lindsay’s family was in town this weekend, and they saved us seats on the steps of Lincoln Memorial. The view from the steps of Lincoln Memorial was spectacular. Unfortunately we had to get there almost three hours early. Even with people saving seats, the National Mall is teeming with people vying for the best vantage point. Our position was amazing. We were situated so that we could see not only the reflection pool and the George Washington Monument, but also the Capital building and the millions of people seated between wearing their patriotic red, white and blue.

Kate and I bought all the girls silly, patriotic hats during the parade which we wore and joked about as we waited for the fireworks.

While we were waiting it started pouring rain. Apparently, this is normal for D.C. It rains every year on the Fourth of July. Lindsay, Ashley, Kate, David and I constructed an umbrella tent in an attempt to save our selves from the rain. It didn’t work; the rain ran down the steps of the Memorial behind us, drenching our clothes. We were all soaked, but we spent the entire time joking and laughing. It’s times like that when you can’t help but laugh and ultimately enjoy yourself.

When the fireworks finally began amidst a slight drizzle, they were incredible. We all stared at the sky open-mouthed, awed by the magnificence of the spectacle above us. The fireworks ran for over half an hour, lighting the sky above the National Mall just above the George Washington Monument. The people sitting in the center of the National Mall heard an orchestra playing the 1812 Overture, which the fireworks were set to. Even without the accompanying music, we all had an amazing time.

After the display we made our way with the thousands of other people avoiding the metro back to Foggy Bottom and George Washington University. This was an incredible Independence Day.

Be the first to comment on "Independence Day in D.C."