Although my D.C. friends and I continued our tour of the city this weekend, we were all exhausted from the past week at work. It seems like everyone I hang out with gets busy about the same time, so this weekend we all agreed to try and keep it as relaxing as possible.

Saturday morning Ashley, Lindsay and I all went to the Smithsonian’s annual Folk Life Festival. I’d heard that the festival was usually pretty interesting and that each year it featured three different countries, religions, or organizations with food, dancing, and crafts from each of those categories.

This year the three highlighted topics were: Bhutan, Texas and NASA. I was a little pessimistic going into the festival…I thought the Bhutan would be interesting, but the other two areas represented at the festival held no interest for me because they were so familiar. Despite my reluctance, I’d heard people rave about how wonderful the festival was. So, bright and early Saturday morning we headed over to the National Mall.

I’ve heard that the Smithsonian has been having some financial challenges and that they are in a transition period right now. Maybe that’s why the Folk Life Festival seemed so uneventful compared to what I’ve heard about years past. To say the least, we only spent about an hour at the festival before moving onto another area we wanted to sightsee. 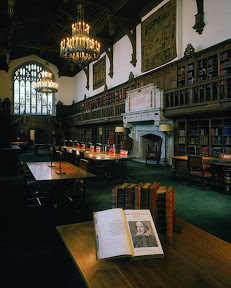 Next stop, the Folger Shakespeare Library. The library houses the largest collection of portfolios and original works by William Shakespeare and is stored in three vaults below the main floor. Scholars wishing to use the text have to go through security screening not only of their person, but also of the research they wish to conduct—tourists like us don’t quite make the cut.

We were able to look into the Tudor-style library through a large window and see the thousands of less-valued texts lining the walls accented by paintings of Shakespeare and his most famed characters. The library was gorgeous! Visitors are also able to see the Tudor-designed stage, where Shakespeare reproductions are performed during the theatre season, as well as the traveling exhibit. When we went, the exhibit featured different styles of armor from areas throughout Europe—highlighting styles which would have been used in the scenes of some of Shakespeare’s most famous plays like Hamlet.

Once we were done looking at the library it was time for Ashley to go to work. Ashley works for Restaurant Associates, which runs the in-house dining for Washington’s various museums as well as Capitol Hill. This weekend Ashley was helping to run an event for one of the Smithsonians.

The Sewall-Belmont house was the official headquarters for the National Women’s Party (NWP) and the 40-year home to world-renowned suffragist Alice Paul. Alice Paul wrote the first section of the Equal Rights Amendment and was one of the driving forces behind the passage of the 19th amendment granting women throughout the United States the right to vote. 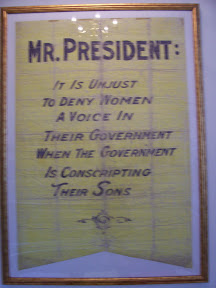 Today, the house stands as a monument to those women who fought tirelessly to finally get women the vote. The museum walls are lined with suffragist banners—the same banners that were used to pickett President Wilson and that led to the 7-month imprisonment of Alice Paul and the hunger strike that outraged America into action. The home also has over 5,000 photos documenting the struggle of suffragists like Alice Paul, Lucy Burns, Elizabeth Cady Stanton, Susan B. Anthony and so on. These artifacts are supplemented by pins, sashes and other suffragist memorabilia.

Perhaps the only disappointment of the Sewall-Belmont museum was that Lindsay and I were the only two people on the 4 p.m. tour. The docents acted like the minimal attention the museum was receiving was normal.

The Sewall-Belmont house is not one of the highlighted tour stops on most visitors’ agendas; most people living in D.C. are probably unaware of its existence. Despite this, I would strongly recommend that visitors to the area, especially women, take one hour to visit the NWP headquarters. The docents are extremely knowledgeable of the struggles that took place in that building and in the movement that was defined by the women who lived there.

My relaxing weekend continued on Sunday, until around 9 o’clock, when Lindsay called and told me I had to come hang out with the girls. I was reluctant to walk the four or five blocks to their dorm, but did so at Lindsay’s insistence.

When I walked into Lindsay and Ashley’s room, I was greeted by Kate, David, Courtney and Sarah. Everyone was there for a surprise birthday party for me, they had decorated the room with light pink streamers and had 20 candles scattered across a Maggie Moos ice cream cake. If you’ve never had Maggie Moos, you’re missing out—it is easily the best ice cream I’ve ever had.

The girls, and David, were so sweet. What a perfect end to the week.

Be the first to comment on "A Relaxing Weekend"