The iconic D.C. tourist would visit Capitol Hill immediately upon arriving in the city, but I don’t really feel like a traditional tourist. I feel like D.C. is my home in some ways, with its teeming metros, street musicians, political activists and aspiring interns. Yesterday, two months into my stay in the nation’s capitol, I finally got my visit to The Hill, and it was fabulous. 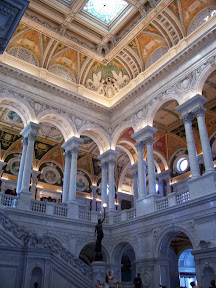 I took the day off work with Ashley and Kate, and together we explored D.C. politics beginning with the Supreme Court. The courtroom is being renovated until mid-September, so we couldn’t watch an oral argument—something I’d been looking forward to ever since I got to see Jacqueline, one of the ladies my mom works with, present an oral argument before the New Mexico State Supreme Court. Yet as I stared into the vast chamber, I was overwhelmed by the history that had taken place in the courtroom—even without witnessing the presentation of a case.

As I’m sure you can imagine, the Supreme Court building has extremely high security and I was only able to see the courtroom and the spiral staircase leading to the various judges’ chambers. Other than that, visitors—I really don’t like calling myself a tourist—are allowed to go below the courtroom floor into the small museum that displays the statues and paintings of former court justices. Central to everything was a giant statue of Supreme Court Chief Justice John Marshall.

The three of us strolled through the museum, watched a video on how the Court reaches a decision and publishes opinions, then meandered through the gift shop.

We met Lindsay and Lauren for lunch at the Longworth cafeteria, one of the busiest lunch spots on The Hill, full of interns, the occasional Congressmen, and—when we went—numerous Generals.

You’re probably wondering why we all took the day off work to do something that could have been done on the weekend. That’s because my roommate Lauren and my friend Erin both work on The Hill and were able to give us tours of both sides of The Capitol on a weekday. Traditionally, visitors have to make separate appointments in order to see both the Senate and the House side of the building, but with our two tour guides we were able to see both.

Lauren took us through the underground tunnels of The Capitol and then up into the building, where she pointed out highlighted features of the structure. In the middle of the crypt is a compass; the Capitol was built in the exact center of the city, and the compass is the center of The Capitol. Apparently, people believe if you walk across the compass, which is the exact middle point of D.C., you will have good luck…so of course, we all walked across the compass on our way to the Rotunda.

I loved the Rotunda with its gorgeous paintings and statues. Another fun spot was the whispering room, where you can hear people talking across the room, even at a whisper, because of the design of the ceiling. 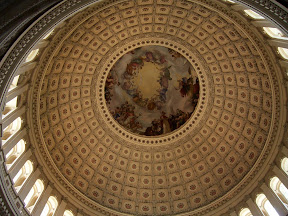 Then we went through more metal detectors—I can’t even remember how many went through during the tour—dropped off all our electronics and were guided into the House Gallery. For most issues, the Gallery is almost empty of representatives. Congressional representatives are able to vote without actually being present, and it was pretty empty when we went. The issue being discussed was a resolution about aide for a group in Argentina, but it was being presented by a representative from Florida! It was neat to watch a representative from the state I go to school in arguing a resolution.

When we left, the few present representatives had moved on to an issue about Burma. We went back outside, collected our electronic items and moved to the opposite side of The Capitol building. Back through a new set of medial detectors, we deposited our electronics with another member of the Capitol Police Department and were admitted into the Senate Gallery.

The Senate was in recess for lunch, so we had to wait until 2:15 before the session resumed. Senators only have to be present to vote on an issue, so just like the House, the room remains relatively empty unless something is being voted on. I did get to hear a portion of a presentation by Pete Domenici, one of the Senators from New Mexico—I got to see people from both my states present arguments before their respective groups…it was pretty amazing.

I learned an interesting fact from Erin while we were in the Senate Gallery; since the Senate became controlled by the Democratic Party two years ago, there has never been a full day of recesses. Even on holidays, someone will gavel in for one minute and then gavel out, preventing President Bush from making a political appointment without the Senate’s approval.

Erin offered to take us over to the Senate offices, which are connected to The Capitol by an underground mini-metro. We took the mini-metro over to her office and wandered around; we even got to see Senator Obama’s office. According to Erin, most of the Senators are in their public offices periodically, but choose to spend the majority of their time in their hideaways in The Capitol. Apparently, each Senator is given a small private office somewhere in The Capitol, and only their chief of staff knows the exact location.

When we left The Capitol, we had one more place we wanted to go—The Library of Congress. As I’m sure you might have already guessed both from this blog and previous blogs, I am a complete nerd. I willingly admit this. The prospect of getting to see the Library is one that has excited me from day one in D.C. Coupled with everything else we did that day, I could hardly contain my excitement.

The library is easily one of the most beautiful buildings I’ve ever seen, with its 23 ct. gold-leaf paint, Gorge W. Maynard murals, Italian mosaics, marble everywhere the eye can see…I prefaced by saying I’m a nerd, so I’m sure I don’t even have to go into how incredible this is when coupled with all the books.

We took the docent led tour so we could see everything, including the re-start of the library after it was burned down during the War of 1812. The restart collection was actually bought by Congress from Thomas Jefferson. Jefferson sold two-thirds of his collection—thousands of books— and they are on currently display in one of the antechambers.

The one bummer of the entire day was that in order to get into the main reading room, rather than just view it from a balcony, you have to have a library card. The girls and I were more than happy to go apply for a library card. As we went down the list we met all the requirements: be over 16—check, have a valid driver’s license—check, blah, blah, blah, but we had a little problem with the last requirement. Have a valid research proposal to submit…nope. I really wish I had a research paper to write right now…