This weekend my Washington, D.C. adventure continued with Mt. Vernon, the former home of America’s first president, George Washington. The sprawling 8,000-acre estate is now only a small portion of its original size but continues to boast the elegance and beauty that George and Martha Washington were known for. 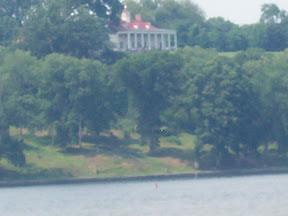 The 45-minute metro ride and 15-minute bus ride to Mt. Vernon took us away from the bustling city, out into the countryside, where Washington’s home is nestled against the Potomac River. We got to Mt. Vernon early enough that we did not have to wait too long to get into the estate, but even during our short wait outside, the heat was oppressive. Coming from an era with conveniences such as air conditioning really makes one marvel at the innovation necessary to keep cool during the time the Washingtons were alive.

While we were waiting outside three period actors wandered around the line talking to us about the Washington estate and playing a form of cricket that would have been popular during George Washington’s lifetime. Tourists enter the estate through the servant entrance to the side of the main house, then cross through a covered pathway before entering into the formal dining room—which is also easily the most opulent room in the entire house.

Each room has historical interpreters, a.k.a. tour guides. I like the way that sounds. I need to remember that for my historical Flagler tours next year: I am a historical interpreter. The tour guides each give a brief synopsis of the functions and events that would have taken place within the room they are stationed in at the estate. In our very first room, the historical interpreter pointed to me and told the visitors that George Washington had red hair the same color as mine—no wonder he was so fantastic! I’m just kidding, but Washington did refuse to wear a wig, instead choosing to powder his red hair so that it met with the fashion of the time. 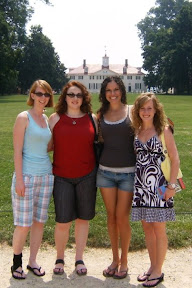 Washington’s home was gorgeous. We were able to see the bed Washington died in, traverse the stairs and hallways that Washington and hundreds of political leaders of the time had walked through, look at Washington’s private office and become a little closer with the history of one of America’s founding fathers. One of the guides told us that more than 600 visitors came to Mt. Vernon as guests during the first year of Washington’s presidency alone!

After we toured the house, we were able to wander around the stables, which still smelt of hay and farm life, before making our way to the Washington family tomb, where America’s first President is buried with 20 members of his immediate family. The tomb is simple in its elegance; Washington lays in rest next to Martha encased in white marble.

The group that runs the Mt. Vernon estate—it is a private organization—has maintained a portion of the farm running exactly as it did when Washington ran it. The farm even includes Washington’s innovative 16-sided barn used to grind wheat.

When we purchased our tickets for the estate, we also purchased tickets for a Potomac River cruise that takes you past the estate on the river bank and highlights more of the Mt. Vernon manor. We were told to partake in the naval tradition of sounding the ferry’s horn while saluting General George Washington as we sailed by his home.

Before leaving the estate, we had one final stop to make—the Washington memorial museum. The museum has artifacts from Washington’s life, including some of his clothing and the camp bed he used during the Revolutionary War.

Mt. Vernon was breathtaking; we easily spent an entire day wandering around the estate, familiarizing ourselves with one more facet of American history.

Be the first to comment on "George Washington Had Red Hair!"