Yesterday was my 20th birthday, and I’ll admit that, as excited as I was to be spending my birthday in D.C., I was a little depressed that I wouldn’t be around my family or friends from school. To my surprise, this turned out to be one of the most exciting birthdays I’ve ever had; it was truly a traditional D.C. day! 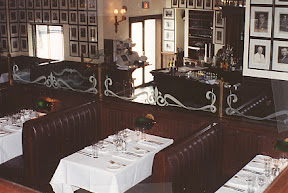 At work, Brooke came by my desk and asked if I wanted to go to lunch someplace “very D.C.” At 12:30 p.m. I found myself a block and a half from the White House at one of the exclusive restaurants known for catering to D.C. politicians and lobbyists—The Occidental. Brooke’s father’s secretary called and made us reservations because it is very hard to get into this restaurant unless you know someone important—I also found out that Brooke’s dad is 31st in line to be president…very cool, to say the least.

You’re probably wondering why the Occidental is in such high demand. Not only is it a block and a half from the White House, it was opened in 1906 as one of the “hot spots” for “politicos and other famous faces.” In fact, the dining rooms have over 2,000 photos, many signed, of famous people who have eaten there including Teddy Roosevelt and J. Edgar Hoover, as well as contemporary politicians like Hillary Clinton and John McCain.

The Occidental is not only known for the people who dine there but also for the events that take place. The most famous event happened in 1962 when it was a meeting place for John Scali, an ABC-TV State Department correspondent, and an unidentified KGB Agent. It was this meeting that led to the official negotiation of the Cuban Missile Crisis. A plaque now hangs above the booth where the meeting took place.

Washington Magazine called Occidental “The Best Place for Celebrity Spotting” in D.C. While I didn’t get to see a celebrity at the Occidental, I did get to see one next door. The Occidental was opened by the Willard family, known for the internationally-acclaimed Willard Intercontinental Hotel, which happens to be next door. The term “lobbying” was actually coined at the Willard because men would wait for politicians to get out of meetings that took place along the lobby floor hallway.

To continue our D.C. adventure, Brooke took me into the Willard for a brief tour of the gorgeous building that is still acclaimed as one of the meeting places for the politically elite. When we got there, we noticed dozens of secret service personnel throughout the lobby and hallway—as Brooke said, not something too unusual for a place with the Willard’s reputation.

As we were leaving, however, we noticed that the entire street behind the Willard was blockaded off; inside the area were dozens of secret service in addition to those in the lobby. There were half a dozen SUVs scattered throughout the enclosed area, one with two huge guns mounted on the roof. There were tents leading into the back entrance of the Willard with another large SUV parked under one of them. The SUV and all the personnel were guarding the President of the Philippines on an official diplomatic visit. My first celebrity spotting in D.C., and it was on my birthday—it was so neat!

When we got back to the office I thought it would be quiet the remainder of the day, but at 3:30, Stephen, the VP of Industry Affairs, came by my desk and asked me to help him get some things together for a conference next week—not an unusual task. He led me into the executive conference room, where the entire industry affairs division was “hiding.” Brooke had organized a surprise cake party with everyone. Brooke really had made the entire day spectacular; I have a terrific boss. 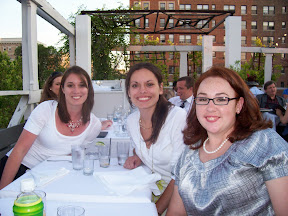 When I left work, I already had plans to go to dinner in Adams Morgan. My dad wanted me to have a special birthday since I was away from family, so he gave me money to take the girls and go to Perry’s, a restaurant we could not have afforded on our own. Perry’s is known for fantastic sushi and beautiful roof-deck dining.

Ashley, Lindsay and I had a wonderful and entertaining dinner. Lindsay had never had sushi before. She loved it; Ashley and I even got to teach her how to use chop sticks. It was hilarious.

When we got back to George Washington, I couldn’t believe the day was already over. Everything had turned out to be fantastic, but I still had one more birthday thing to do. You may not remember from earlier blogs, but when Kate and I first met we bonded over the fact that we share the same birthday. Kate’s parents were in town so she went to dinner with them, but once we were all back at GW, we had our birthday evening together.

The 24th of June was not only special for Kate and I. When I got into work Wednesday morning I found out that Alexis got engaged…I guess it really was a wonderful day for everyone.