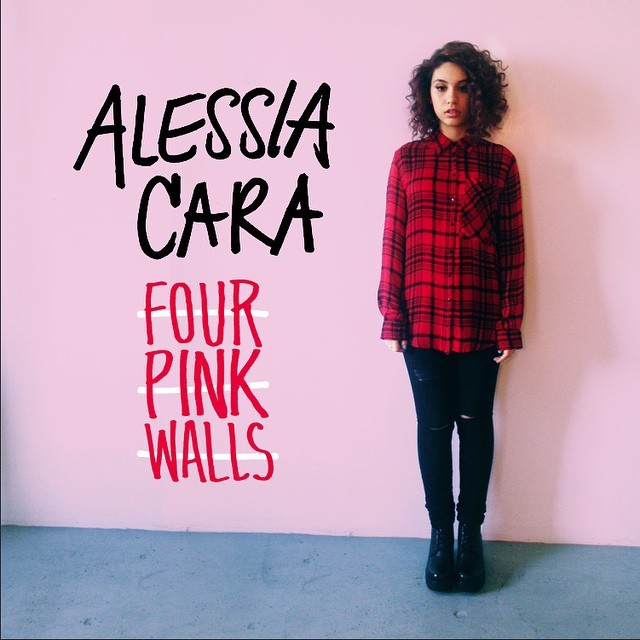 “Then the universe aligned/With what I wanted all this time.” As the main chorus for her song, “Four Pink Walls,” Alessia Cara describes how she has broken the confines of her bedroom and has finally made it to stardom. Alessia Cara, stage name for Alessia Caracciolo, is an up-and-coming artist, who, at a mere 19 years old, has already released her first EP, “Four Pink Walls.”

Cara has already started performing on big stages such as Teen Vogue’s Young Hollywood Party and The Tonight Show Starring Jimmy Fallon. Not only is her contemporary R&B sound attracting millenials, but her lyrics and vocals also speak to a new generation. “Four Pink” Walls deals with the usual drama that comes with the territory, such as partying, relationships, and the struggles of growing up.

“Seventeen” is debatably one of the more fun songs from the EP. She describes what most kids go through when all they want to do is grow up. However, when they finally are grown, all they want to do is stay young. People young and old can all relate to Cara’s lyrics. This particular song has a more upbeat tempo and foot tapping sound, and Cara really shows her impressive vocal range when singing the chorus. When reviewing the lyrics, this song proves to be sweet and enduring, and really takes you back to your childhood.

As the lead single for her EP, “Here” is Cara’s own take on a party anthem. How she puts her personal flare on this is to make “Here” an anti-party anthem. In fact, this song was based on a real party that Cara went through where she felt so uncomfortable and out of place that she had to leave. “Here” speaks to everyone out there who doesn’t know why they are at the party. Her consistent timing and complex lyrics make this song extremely soulful and makes you want to remember each lyric.

In “Outlaws,” Cara is not alone, using “we” in front of most of the verses in the song. “We’ll be Outlaws/We’ll take on the world/We’ll be Outlaws.” In Cara’s own words, “Outlaws” “has a very old school, throwback feel to it.” Even though this song is about crime, it has a romantic vibe to it. “Outlaws” talks about a couple going through everything together, good and bad. And really, if you are willing to be “partners in crime,” then you definitely have a keeper.

“I’m Yours” takes on a different approach that makes this song stand out in Four Pink Walls. This song has a sarcastic tone to it, because Cara is chastising her “admirer” for liking her. Once you look at her lyrics, you see that Cara is taking on this tone because she has been “hurt” in the past, so she is worried about getting too close to anyone again. Again, Cara shows how realistic and relatable her songs are, and the repetitive lyrics make this one of her catchier songs. Again, Cara shows her vocal range in this song, which is a refreshing twist to her usual monotone nature.

Having a more urban sound to it, “Four Pink Walls” is rightfully the name of the Cara’s EP. This song recounts the success Cara has always dreamed about since she was a kid in her room surrounded by her “four pink walls.” According to Cara when discussing her walls, “although they’re not pink anymore, I still feel the same when I sit and stare at them.” This song is the Cara’s “breaking out of my shell” story, and she really brings out her R&B sound through this song.

Cara has created music videos for all of her songs from Four Pink Walls. Each song is made and directed by Cara. They are so simple and unique that they are perfect for Cara’s raw and realistic sound.

If you are interested in upbeat alternative, then Cara is the singer for you. All of her songs are wonderfully personally and are catchier then ever. Her songs are so complex that if you remember all of the lyrics to even one of her songs, you would be able to impress anybody. Cara is new, but she is here to stay. Four Pink Walls is just the beginning.